The Nikon F-mount is a type of interchangeable lens mount developed by Nikon for its 35mm format Single-lens reflex cameras. The F-mount was first introduced on the Nikon F camera in 1959, and features a three-lug bayonet mount with a 44 mm throat and a flange to focal plane distance of 46.5 mm. The company continues to use variations of the same lens mount specification for its film and digital SLR cameras.

All 35mm SLR and DSLR cameras are technically 'F' mounts, they're referred to this because the first popular Nikon camera model that used this bayonet mount was the 'Nikon F'. So even if the Nikkor lens you have is marked AI, AI-S, AF-D, E, G, etc, the mount the lens itself uses is still the Nikon F mount.

So why have a separate adapter for the lenses with the 'G' designation? While the G lenses are the still the same physical F mount, the G indicator means there is no aperture dial on the lens itself. So while the G lenses will physically fit the standard F mount cameras and adapters, there is no way at all to change the f-stop on the lens. The adapters marked as Nikon G Mount are specifically made for those lenses in mind and have a dial built into them that allows you to control the lens iris from the adapter! 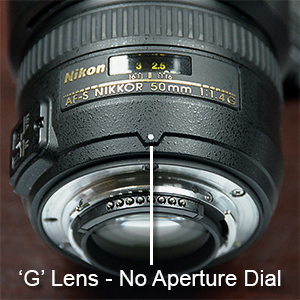 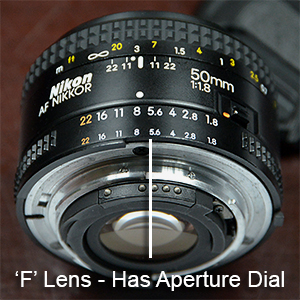 Additionally the Fotodiox Nikon G adapters will work with both the newer G lenses as well as all the older F style lenses which have an aperture dial on them. On the older lenses that already have an aperture ring, the dial built into the adapter works like a depth of field preview lever, allowing you to quickly open and close the lens iris to a preset point (ie; set the lens to f/8 then use the dial to quickly open the lens up to f/1.8 for focusing and composition, then close it back down to f/8 for metering and shooting).

So if you only have older style glass and will never get a newer G style lens, save a couple bucks and get the F adapter. But if you have or may have in the future a Nikkor G lens, make sure to get the G compatible adapter and save yourself from some headache down the road!